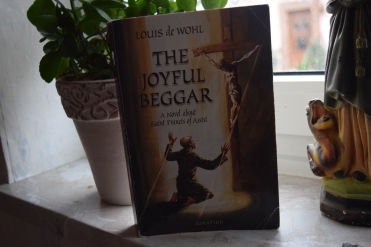 St. Francis of Assisi is one of the most well-known saints of all time. He’s popular among Catholics as the patron saint of animals, and even non-Catholics know who he is. The Joyful Beggar is the story of Francis’ life, as told by one of the greatest Catholic storytellers.

The Joyful Beggar follows Francis as he goes from being the spoiled son of a wealthy merchant to the founder of the Friars Minor, or Franciscans. Born in Assisi, he was named Francis after his father’s love of all things French. There are other storylines that add to the richness of the story. The lives of St. Clare of Assisi, Frederick, King of Sicily and Holy Roman Emperor, St. Dominic, and Pope Innocent III are woven in with ease. Mr. de Wohl is a master of detail. He described the Italian countryside, the sands of Egypt, and the Italian society of the 1200s in amazing detail.

The Joyful Beggar was made into a movie called Francis of Assisi. I actually watched the movie not that long ago on the feast of St. Francis, October 4. It seems to be pretty typical of a movie made in the 1950s or so, (I didn’t see the actual date). It has a very grand, sweeping style, but plays around a bit with the novel. That’s understandable, as it’s rather hard to cram a 370 page book into an hour and a half movie!

I enjoyed the book and the movie. The Joyful Beggar was the first de Wohl book I ever read and I have been hooked ever since. 🙂

Have you read any of Louis de Wohl’s books? Which is your favorite? Tell me in the comments!

About Alice In Bookland

Welcome to Alice In Bookland, a blog about random bookishness and yarny goodness!

I love books, reading them, owning them, and smelling them. (I really love the smell of books.) Yarn is life and knitting makes the world go round. (Okay, slight exaggeration.)

Check out the tag next to the homepage for more information about Alice In Bookland. :)

Also, please feel free to share this site with any fellow book-lovers or knitters you might know.

looking for something specific? search here!

"Tell us a story!" said the March Hare. ~Alice In Wonderland by Lewis Carroll

All content on this blog is mine. Please do not copy any of it without permission from me. Thank you!